I had been preparing the kids for a long time about the cat dying. I harped on like the doomsday prophet, warning that ‘he might not see Christmas’ and often prompting them to say goodbye to him extra carefully as he ‘wasn’t well’.

We found out a few years ago that his kidneys weren’t doing great and we’d been pepping him up every month with injections from the vet. He was living on borrowed time and we loved him all the more for that. I think his daily smooches went up tenfold after the kidney diagnosis. He even received a golden ticket to sleep in our bed again, having been booted out in years gone by in favour of babies, general exhaustion, toddlers, kids. Some nights it’d be the 2 of us, 2 kids with mysterious ‘bad dreams’ requiring a 2am snuggle, and the cat, who although only small, took up a lot of space.

Tim had had Heri since he was a tiny kitten. Tom & I met Heri when he was 5, and our 2 daughters knew of no life before the cat as he was there since they were born. He was 16 human years old, 112 cat years.

He was a cat with a huge personality, as most Burmese are. He shouted to announce his arrival every time he entered the house (several times a day), every lap was his to own (every visitor in particular), and just last week he chased the neighbour’s cat off the property (again) when it got too close to the pet rabbits.

Heri died on Sunday. His kidneys gave out. We could see how ill he was even after fluids, steroids, anything the vet suggested. It was time. We knew this. We knew he had lived a wonderful life.

All were devastated, but all 3 kids reacted differently. Our 8 year old was matter of fact, cuddling his body, collecting flowers, and talking to him. Our 5 year old cried intermittently all day and climbed up for hugs every time she thought about him. Our 15 year old hid the tears bravely but that didn’t mean they weren’t there.

We had a little funeral and ate sausage rolls afterwards. A fitting farewell.

We’re ok, and thank goodness we have the rabbits to pat, but I keep catching shadows out of the corner of my eye and thinking its him. He was with me constantly for ten years.

cuddled to the very end 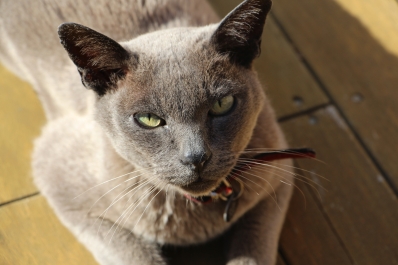 basking in the sun

fun in the balloons