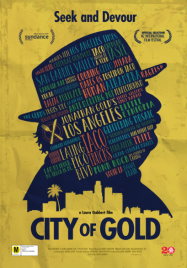 “CITY OF GOLD offers the rare opportunity to discover the true Los Angeles through the eyes of its foremost cultural writer, and most loyal fan, Pulitzer Prize-winning restaurant critic Jonathan Gold.

Gold has long been adored for his cultural writing about LA’s hidden culinary treasures; he was one of the first critics to review small family owned restaurants in far-flung ethnic enclaves with as much passion as the haute cuisine establishments of Beverly Hills. With a stroke of his pen, he’s changed the lives of countless immigrant chefs.”

The thing that strikes you within the first couple of minutes of this movie is that you’re seeing a Los Angeles that you would otherwise never see. On that 3 day stopover en route to Europe where you endured the endless queues at airport customs, visited Santa Monica, Venice Beach, Hollywood, and drove around in a jetlag fog looking at cool stuff, although you knew you only scratched the surface then, well, you would never have noticed any of this LA even if you stayed a month. It takes a lifetime to understand the city Jonathan Gold sees.

This is unpretentious LA. This is the back streets – mini marts, urban sprawl, cityscapes never before seen onscreen. This is the land of immigrants who start up food outlets in trucks, on street corners, inside average malls in average suburbs and create phenomenal food. This LA waves a welcome and places a fragrant bowl in front of you without even asking if you’re hungry. This LA is someone’s home.

Jonathan Gold is the subject of City of Gold. He is one very intelligent ex punk rocker, writer, and LA native who happens to be food critic for the LA Times. He is beyond famous in the food world. If your restaurant features in his column you can expect a line of people out your door waiting for lunch the next day – and every day after that. He even won a Pulitzer Prize for his writing, something no other food critic has ever done. Through his work he’s actually redefining the whole culture of eating.

“A Los Angeles native, he began writing the Counter Intelligence column for the L.A. Weekly in 1986, wrote about death metal and gangsta rap for Rolling Stone and Spin among other places, and is delighted that he has managed to forge a career on the professional eating of tacos.”

he used to be anonymous… 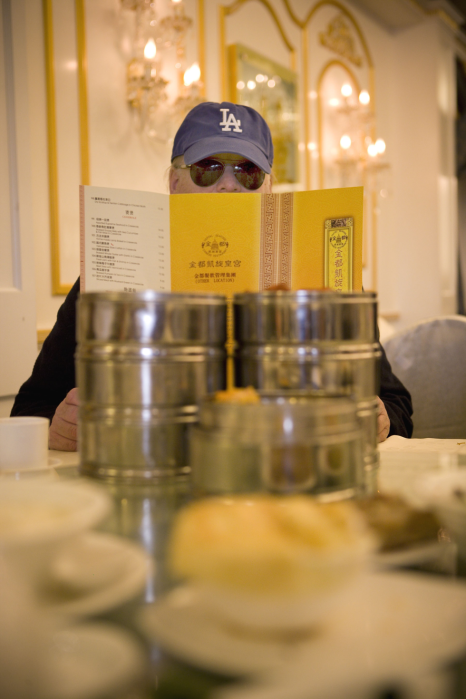 He loves food and he loves the people that make the food. The thing is, he’s got it so right. To get to know someone from another  culture, start with food. Eat good food together and talk. Do that enough times and you’re old friends. After all, “cooking is what makes us human”. 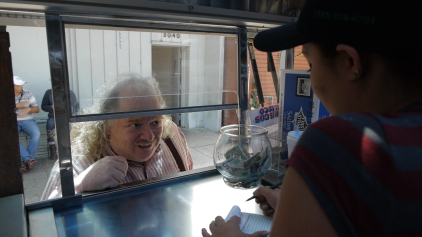 As you watch City of Gold, you really start to like the guy. It happens about the time he explains in detail why ‘taco’ is an action and should be listed as a verb. And the deal is clinched when he happily admits he’s been to see someone to help him with his leave-it-till-the-last-minute writer’s block habits that drive his editors to distraction.

He usually visits a restaurant several times before he reviews it – his record number of pre-review visits being seventeen. Homework done. Tick. His writing is exquisite. Read what he wrote about hagfish here and his May 27th column here.

CITY OF GOLD is directed by Laura Gabbert and is in cinemas now. Thanks Madman! Anyone in LA can go and hear Jonathan Gold talk for free at Litfest on June 4th.