“In the 3D animated comedy, The Angry Birds Movie, we’ll finally find out why the birds are so

angry. The movie takes us to an island populated entirely by happy, flightless birds – or almost entirely. In this paradise, Red (Jason Sudeikis, We’re the Millers, Horrible Bosses), a bird with a temper problem, speedy Chuck (Josh Gad in his first animated role since Frozen), and the volatile Bomb (Danny McBride, This is the End, Eastbound and Down) have always been outsiders. But when the island is visited by mysterious green piggies, it’s up to these unlikely outcasts to figure out what the pigs are up to.

On Sunday I was treated by Sony to a screening of The Angry Birds Movie, their first feature film with Finnish firm Rovio Entertainment which opens today across New Zealand. My movie chicklets and I were most excited. I was wondering if I would get it as shock horror I haven’t done the Angry Birds game. (Wikipedia tells me it is the most downloaded game of all time – 2 billion downloads!) 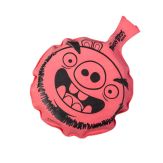 We got given cool stuff like glasses, whoopee cushions, popcorn and such (similar to the Autumn prize packs I gave away for Eardrops recently) which have since been taken to school for news, worn, whoopeed, laughed at and yes, popped.

It’s a bright colourful funny movie I know I need to see again. Didn’t matter that I hadn’t played the game. There is so much happening in each scene, so many asides, background jokes and truly brilliant animation, in particular on the characters faces.

I love being in a cinema with loads of children laughing at slapstick jokes. Couldn’t think of a better way to spend a couple of hours. There was humour for adults too. At one point my partner and I looked each other, both in tears of laughter. It takes a lot to give me the giggles, but the character of little yellow crazy bird Chuck did it. He’s voiced by Olaf from Frozen (Josh Gad).

Although, just sayin’, there is a massive theme of colonialisation going on. The pigs turn up, befriend the locals, introduce cool stuff into the society (like country music, trampolines and slingshots), before making off with all the eggs on the island. The natives then have to travel offshore to take back what’s rightfully theirs using violence.

But its ok in the end because Red, he of the famous eyebrows, is accepted back into society, anger and all. Order restored and everyone’s a little wiser for the experience.

Its a must see movie. Wait for the scene where Chuck sings for The Eagle. It’ll bring tears to your eyes. It hits the cinemas today.

The chicklets have a little say:

And for extra fun, angrify yourself here.

Honey I angrified the baby 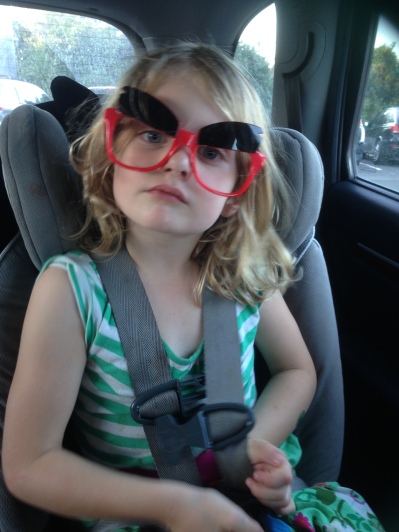 does she still look the same?