I was lucky enough to grab a couple of hours today to watch Madman Entertainment‘s new DVD release, the Australian documentary Gayby Baby today. This film’s a good watch. 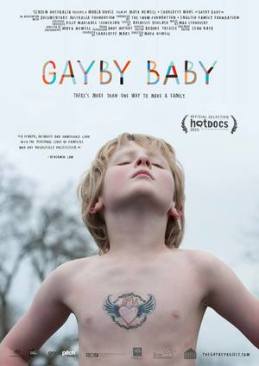 Its about four Australian children who let the audience into their homes and allow the cameras to share their lives for a short time. There’s lots of normal family stuff, like a girl trying to get into a desired high school, like a boy trying to convince his Mum to take him to the Wrestling. There’s homework, hugs and loving intelligent parents doing their absolute best.

There’s the harder stuff, like a family coping with a toddler having constant and major seizures and another family playing schoolwork catch up with their adopted son who wasn’t taught to speak as a young child. (Where’s that kid better off, I venture to ask?)

The film has some classic moments, like one Mum who, when her son is snapped at by a store clerk for trying on lipstick, explains ‘its fine as long as you were using the tester’. Well done Mum. Store clerk, you should have sat that kid down and shown him what shade suited his skin tone, you missed a sale! (And showed yourself up badly on film love).

Generous of the children to take part, considering the NSW education minister banned this film from screening in schools during school hours. Schools these kids attend?

Generous of the families to take part, considering the way they live is still illegal in many countries.

Unbelievable, right? Yes, this stupid outdated opposition still happens. It happened in Australia last year. That’s what makes this film an important piece of public media. (As an aside, this project was Australia’s biggest crowdfunding effort to date, so I guess not all Australians think like the NSW education minister does).

Perfectly normal families leading perfectly normal lives wrong and wicked because they happen to have same sex parents doing the dishes, cooking, cleaning, laundry, taxi driving, debating, financing, and all the other – let’s face it – mostly kinda boring stuff – that parents do.

I say, what’s the big deal? Who someone chooses to love and marry is none of my business. And the bigger the loving safety net around a child, the better. If a couple is prepared to love and care for and fight tooth and nail for that child like any ‘regular’ Mum and Dad would why would they be denied the chance to do this?

Respect for differences, support for all parents, children who feel secure and loved, growing with tolerant and peaceful minds.